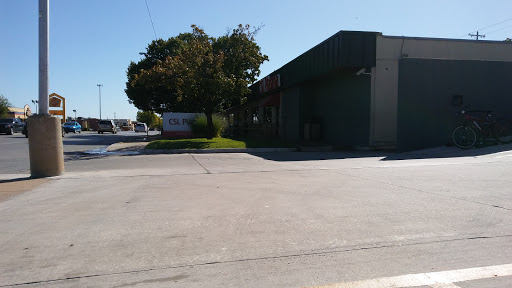 This place was filthy on the outside and filthy on the inside. I had to use the restroom before i donated and both toilets were spattered with dry blood and there was feces on the wall. When i got to the donir floor there were9 people waiting to be disconnected and two clients were standing directed to stand over a cart till someone came to assist. With their bleeding arms. They had been sent on their way without being wrapped to prevent bleeding. The cart the were instructed to stand over held full donation bottles when i was finally disconnected i too was sent on my way without having my arm wrapped and was given a cheap bandaid that did not stick to the betadine. Also the donor beds were dirty and mine smelled of urine. The staff were freindly and professional but the facility was absolutely disgusting. When i returned for my second donation it was in the same condition as it was two days before and i was told that i had to come back with proof of residence again. So i came back the next morning and was told that i could not donate due to my home address being blacklisted. My time was waisted on two occasions for no apparent reason except lack of training. I would have not even given a star but the only way i could

Rude. Rude. Rude. The women at the front desk, rude as ever. They never seem like they wanna be at work. This place is pretty much the nastiest plasma donation center ever. Bloody bandaids everywhere outside. There’s literally drops of dried blood outside on the sidewalk right by the building. They hire & train anybody, hence why half of them don’t even know how to stick you. If you want to be treated like a bum & have a painful hole in your arm, this is the place to go. Plus, they don’t even pay that much. If you want to have a good experience at the donation center & not feel like a test dummy , go to Talecris on Western. They pay you way more, the employees are actually friendly & QUALIFIED !!!

So iv been comming here for over 5 years and so on Wednesday i went there (my normal donating day) i went and did my kiosk thing and went to do my vitals check up and there was this new girl in there that didnt know anything and said my plasma was to "fatty" and im like what? Iv been comming here for 5 years and not once has anyone told me that my diet has not changed i drink plenty of water so what the hell is she talking about? Needless to say i got deferred which messed up my schedule and wasted my time now im going to miss out on my bonus because of one new idiot that didnt know what they where doing

As previously stated, the staff of this location are racist toward non-black people. The staff have very loud non-work related conversations with lots of profanity and present a very unprofessional image overall, in particular this one nasty heifer named Regina. While in the donating bays, the phlebotomists tend to treat the donors like cattle, and shout across the room to each other things they should probably keep to themselves. All in all, donating is an unpleasant experience solely because of the behavior of the vermin who work at CSL Plasma.

The staff was friendly and courteous and helpful for a first time donor. The process for a first time donor takes a while. Count on two and a half to three hours for your first trip. After that they say it should go faster. There are several lines, one for a blood testone for a , a questionaire to fill out and one for a physical to complete before you can even start your 1 hour donation . I have no complaints for my first visit. It was what I expected for my first trip.

If I could give this place a negative 5 on stars I would. They have the most incompetant people working there. I have been a plasma donor since 1995 and I will never go back to this place again. Lines are always long. They never have a sence of urgency to get ppl thru. All if a sudden my iron is either too low or my protien is too high. How in the world after all these years does that happen. Never had a problem before. Csl okc needs to be shut down.

Donated for the first time ever today. Everyone here was professional, explained everything in detail, double triple checked if I was comfortable, nice, clean & knowledgeable. For first time, plan on 2.5 hours - 3 hours. Check on Google for the $6 coupon too. First time = $56. You can donate twice per week. Your first five donations = $250. $50 each. After that it will be based off your weight what you get paid. Easy process. Easy money.

Reading over the reviews I see a lot of negative reviews. I see a lot of people saying the staff are rude, or saying they are racist to non black people. As a white female, I have been treated with nothing but respect by the staff there, they are always so nice and sweet to me and everyone there. If your looking for a place to put a little extra money in your pocket and help at the same time, I would recommend this place.

They close 10-20 minutes early all the time. They are rude, they fool around and waste time so they can avoid screening people so you are stuck in line while they chat and screw around. They lie and tell people who come in 30 minutes before 7 that they are closed they talk bad about donors to other donors and give their friends and certain others special treatment. If you can avoid this place do

This place is horrible. Nothing but indigent people, no security. The login computers have been broken for months on end. UN helpful staff, rude staff. They advertise free Wi-Fi but it never, ever works. The manager has a single digit I.Q. Score. There is no valid reason to Ever enter this building. Unless you want to get paid 2.50 an hour for your time.

The staff is incredibly rude. The facility is dirty and stinks. I went there a few times then decided the politeness of the OBI staff (Oklahoma Blood Institute) was far more valuable than the few dollars CLS begrudgingly gave me.

Great staff everytime!! I dont get to come ever week but when i do i get my usual to poke me. Great place to come to for extra money!! Plus they always have weekly bonuses n never have to wait long.

The people who work there are rude and unprofessional! And I know of two of the female employees who are ghetto trash hos who go after married men! Absolutely worst place to donate in OKC!

Most of the people have poor attitudes towards each other, and only a few of the people there are friendly. Plus they never answer the phone...called 6 times today and nobody picked up.

They will literally look at you when you need to be unhooked from the machine. Yeah good pay but waiting 15 to 20 mins to get off of a machine? That needs to be address immediately.

Have the worst computer system in the world, bet African bush people have a better computer system. Constantly have to be checked and rechecked because of their sorry ass computers

Everyone is always super nice and friendly! Love meeting new people to talk to in line. Jacob is my favorite phlebotomist, he never misses!

I walked two miles and wasted resources to go and donate to find out that my veins were "too small" waste of effing time.

One emplyee, Patrick was lookin over my shoulder at my phone while I was donating. Very intrusive and unprofessional.

This location is great. The staff could show a little more professionalism, but other than that it is still great.

Staff is efficient more often than not. They could be friendlier, but overall, my experiences have been pleasant.

Professional staff but the place is busy, come early and expect to wait...I catch up on reading.

The staff were awesome & very nice! The lady at the front was helpful and the nurse was cool!

I watched The Green Mile for the first time here... I guess this is growing up.

First time donating at this facility and everyone was friendly and professional.

Professionalism is lacked @ this location. Could really use some up-training!

Great environment and the staff always make sure you will be comfortable.

Very understaffed so there are long lines and takes hours to get through.

Not bad, Could be less people if they actually had jobs, but not bad.

Great staff .they make sure your comfortable.and its always clean .

Racist staff, extremely unprofessional I would avoid this place

Cool employees but the place smells like poor people farts

Seems like nobody knows how to do there job right.

The place can be pretty good. Yup! Yes!

Im military and they treated me rude

There professional friendly and fun

Wonderful stuff will let go back

Under staffed with jerks

Never had any problems!

No help was so ever

The rude ones quit 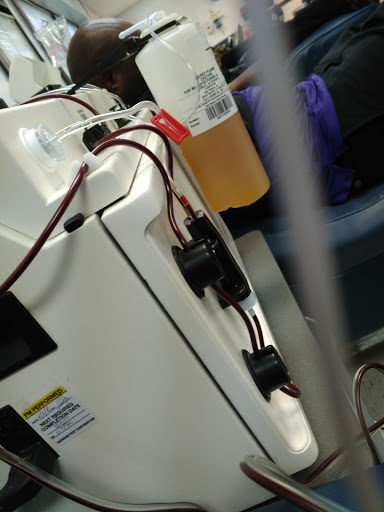