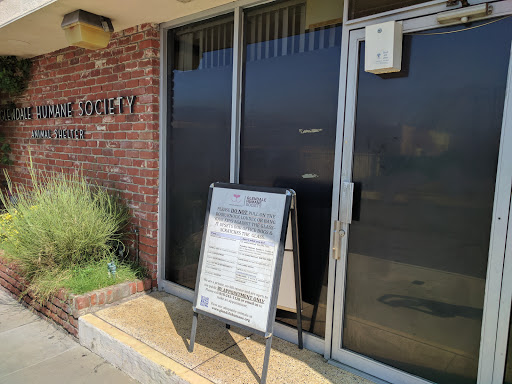 We wanted to adopt a dog this year - we had everything ready but had a heck of a time finding the dog! We did not need a purebred or any particular type of dog but I have small kids and I needed a dog that would enjoy them and not scare the visitors. Originally, I went to my local SPCA (Pasadena) but most of the nice, friendly non-pitbulls had waiting lists or had just been brought in. I went on Petfinder and there were overwhelming numbers of dogs but when I followed up some were gone.. some were hard to meet.. some were in rescues who would not let us meet the dogs until we had filled out 4 page essays on what brand of pet food we would feed them. Jeez Louise, I just want to meet a few nice dogs and give one a happy home! Then I found GHS and that was the beginning of our happy ending. We went into their shelter, almost all of the dogs were available (some were pending adoption) and I could easily have brought home any dog they had and been happy. GHS goes into high-kill shelters and rescues dogs that are highly adoptable - so all of their dogs are friendly and healthy. We immediately found 3 dogs we loved, narrowed the list to 2, played with them both and finally narrowed our list to 1. A week later, we brought our sweetheart home. Our dog is a complete mutt and the best dog ever. She loes to play, she loves other dogs - our neighbors all have purebreds and they speak enviously of how mellow and even-tempered our mutt is! We could not possibly have found a nicer dog and I am so grateful the GHS saw her potential and rescued her from the high-kill Riverside pound. They saved a great dog and I feel so lucky to be the beneficiary of that work! It has been 6 weeks since we got our girl and in that time most of the dogs we saw at GHS have been adopted so I know they do a good job of finding homes for the dogs they rescue. So if you need a good dog - look no further. The "meet" process was easy, the adoption process is pretty straightforward and the dogs they have are wonderful. Thank you, GHS!

I originally contacted the Glendale Humane Society on June 18, 2009 because I was looking to re-home my dog. The person I communicated with, Star, is an individual who I have come to judge as a complete scatterbrain and would best avoided if you’re looking for any sort of meaningful assistance in listing your animal on the shelter’s website. From my own experience, Star is not only particularly adept at ignoring emails for long stretches of time (we’re talking weeks, here) but she can also claim great prowess at losing information like emailed bio’s and pictures and then claiming she never received them. Now, because the only individual with whom I’ve had electronic correspondence with at the shelter is Star, my rating is admittedly based on my dealings with her and her alone. That said, it’s too bad the lowest rating I can give is only one star, since Star’s lack of assistance really merits negative stars. In closing, if you’re interested in using the Glendale Humane Society’s courtesy listing option, take it from me that you may be in for a frustratingly long wait. (I myself am STILL waiting for them to post my dog on their website despite the fact that, since mid-June, I have supplied them with multiple bio’s and pictures.) Also, I would be happy to forward all emails, both from myself and from Star, to anyone who doubts the truthfulness of this little anecdote. Thank you.

I called about a particular dog on Sunday. The woman had only negative comments and tried to convince me that I was not a candidate to adopt a dog. I tried desperately to assure "Alice" that I could provide a loving home and I would be there 24/7 to work with this dog. She could not get me off of the phone fast enough and left me in tears. Why does she make it so hard when I LOVE dogs and have every qualification to love and care for ANY dog?

All the people who say that their service is bad and that they were rude to them should be quiet because the people working there want to make sure the dogs are going to good homes and not just people who think having a dog would be "fun" and "easy". Also people who only get dogs because they are "cute" should be ashamed

Now they are by appointment only, before the shelter got a makeover it was anybody was welcome now you have to call to come in to adopt. Not happy becauae many dogs could be rescued but with setting up appointments makes it more difficult to rescue

What the hell is that Chinese Flag