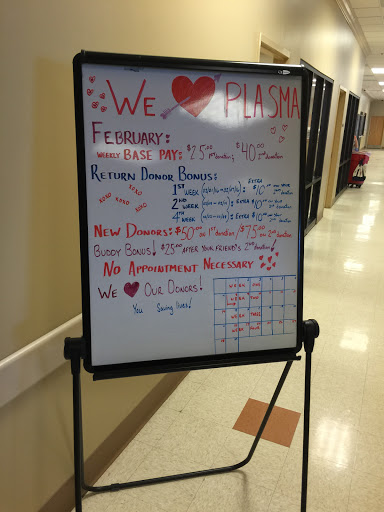 Terrible place to be. There were about thirty people all ready in the clinic at eight a.m. when i arrived there, whom of which all seemed to look like addicts. They were all very casual with each other and spoke very loudly in the center as they were probably there for their maximum twice a week donations. Everyone seemed to know each other and there was actually a constant roar in the place for almost two hours but did quiet down around noon when i was sitting with most likely the third group of entirely new people in the waiting room. I was a first time donor and i actually spent six and a half hours in here just to donate. By the time i did get to donate the phlebotomist did do a good job drawing my blood and explaining the process to me. No bruising of my arm occurred and it was very comfortable on the donation floor.

Been going here for about 8 months. Left today without being able to donate because i had my arm murdered and after about 6 different slides of the needle i got fed up with the pain and inexperience of the one poking me. My arm is now on fire and i am extremely upset about this experience. Out of my 8 months this is probably my 3rd bad experience along with being my worst. Dont think ill ever go back again

if the staff would stop talking to each other and do their damn job it would go alot smoother and faster. Hire people that have customer service and medical field experience and maybe you would have a better outcome! Its saginaw.. Its busy... Hire people who care about their job not idiots off the streets..!

I have been donating for 5-6 weeks now and have had a good experience each time. I feel that the staff are well educated in their field. I plan to continue donating for a long time. It feels good to do some thing to help others and getting paid to do it.

People up front that work there wanna have professional jobs with ghetto attitudes it shouldnt take 2 and a half hours to donate maybe 1 and a half like at csl but there vety processional there and know how to do there job without taking all day.

The idiot guy there. Blew through my vein and into my arm. He was wondering why no blood was coming out. I ended up in the hospital. So the money I earned ended up going towards my hospital bill. Never again!!!!!

I was a first timer today....it did take me about 4.5 to 5hrs but it wasnt that bad....i will be a repeat 2x a week mostly because its my way of helping the ill....and the pay does help some....thank you

I sat for two hours without even being called as other people flew through the process. The money would never be worth that wait to me. Very unprofessional and a huge waste of time.

Thiis was ridiculous was here for 4 hours and did not even get seen. I made an 8 am appointment. What is the point of making an appointment if you are not going to get seen.

The pass couple months been long wait time 2-3 hours. Today took me 3 hours too get in the back. Need too hire more ppl.

Very unprofessional. The donors are rude and the guard is just a friend in a uniform. Very unsafe feeling there.

Very poor service and not very friendly though they pay better than most plasma centers.service is slow at best.

Whats the point of setting appointments if you cont get called til 1.5 hours after your 3pm appointment

They are nice, friendly, gentle and I recommend if in the need.